If yesterday’s post of Lawrence Lessig‘s TED talk on corruption gives you reason for optimism, you may want to check that after you read this from perennial thorn in the side of the powers that be Noam Chomsky, who writes of a peculiar distinction between the most “advanced” societies in the world today and those  least touched by technological “progress” as far as the threat of climate change goes:

So, at one extreme you have indigenous, tribal societies trying to stem the race to disaster.  At the other extreme, the richest, most powerful societies in world history, like the United States and Canada, are racing full-speed ahead to destroy the environment as quickly as possible.  Unlike Ecuador, and indigenous societies throughout the world, they want to extract every drop of hydrocarbons from the ground with all possible speed.

Both political parties, President Obama, the media, and the international press seem to be looking forward with great enthusiasm to what they call “a century of energy independence” for the United States.  Energy independence is an almost meaningless concept, but put that aside.  What they mean is: we’ll have a century in which to maximize the use of fossil fuels and contribute to destroying the world.

And that’s pretty much the case everywhere.  Admittedly, when it comes to alternative energy development, Europe is doing something.  Meanwhile, the United States, the richest and most powerful country in world history, is the only nation among perhaps 100 relevant ones that doesn’t have a national policy for restricting the use of fossil fuels, that doesn’t even have renewable energy targets.  It’s not because the population doesn’t want it.  Americans are pretty close to the international norm in their concern about global warming.  It’s institutional structures that block change.  Business interests don’t want it and they’re overwhelmingly powerful in determining policy, so you get a big gap between opinion and policy on lots of issues, including this one.

This seems to be a pretty important point, but it’s very difficult to know how seriously it’s being taken: The United States government does not have the species’ or the world’s best interests at heart. And it’s not just the Republicans, who are an easy target for American liberals,  that we have to blame. The fact is the Republicans are pretty much brain-dead and useless at this point. But are the Democrats really all that much better on this issue in particular? END_OF_DOCUMENT_TOKEN_TO_BE_REPLACED 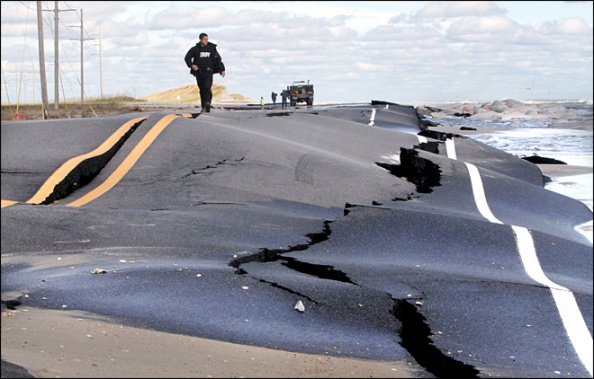 Andrew Revkin, in his Dot Earth blog for the New York Times, has been writing a lot over the past few days about the relation of global warming/climate change to the ferocious late-season appearance of #Frankenstorm Sandy, which flooded lower Manhattan, Brooklyn and Queens, tore up the Jersey shore, killed some 40 people in the US and left more than 7 million on the East Coast with no power for several days (not to mention the overlooked damage it wrought in the Caribbean before smashing into Delaware on Sunday). Many of his readers (including climate activist Dan Miller) accuse Revkin (who is a science journalist and not a professional scientist) of taking too cautious a tack on climate change generally and on human responsibility for the increase of North Atlantic storm activity in particular. END_OF_DOCUMENT_TOKEN_TO_BE_REPLACED