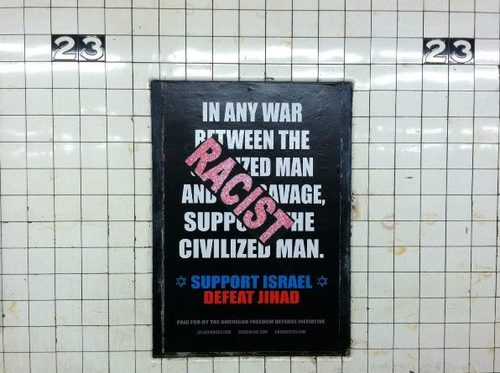 A few weeks ago, a fight broke out between two heavyweights of the blogosphere: Sam Harris and Glenn Greenwald. I respect both of them so didn’t want to have to choose sides. Harris, author of The End of Faith, etc., is one of the most formidable defenders of secularism and atheism, and Greenwald, formerly of Salon and now blogging for the Guardian, is a ferocious advocate for civil liberties in the wake of 9/11.  They’ve been friendly en0ugh in the past to have each other’s private email addresses, apparently, which is where the fight began.

It started over a series of articles in the media claiming the “New Atheists” exhibit bigotry in their attacks on Islam. The first salvo in this attack came from Nathan Lean at Salon:

Until 9/11, Islam didn’t figure in the New Atheists’ attacks in a prominent way. As a phenomenon with its roots in Europe, atheism has traditionally been the archenemy of Christianity, though Jews and Judaism have also slipped into the mix. But emboldened by their newfound fervor in the wake of the terrorist attacks, the New Atheists joined a growing chorus of Muslim-haters, mixing their abhorrence of religion in general with a specific distaste for Islam (In 2009, Hitchens published a book called “God Is Not Great,” a direct smack at Muslims who commonly recite the Arabic refrain Allah Akbar, meaning “God is great”). Conversations about the practical impossibility of God’s existence and the science-based irrationality of an afterlife slid seamlessly into xenophobia over Muslim immigration or the practice of veiling. The New Atheists became the new Islamophobes, their invectives against Muslims resembling the rowdy, uneducated ramblings of backwoods racists rather than appraisals based on intellect, rationality and reason. “Islam, more than any other religion human beings have devised, has all the makings of a thoroughgoing cult of death,” writes Harris, whose nonprofit foundation Project Reason ironically aims to “erode the influence of bigotry in our world.”

Frankly, this strikes me as revisionist history if not an outright slur. It’s true that Harris’s The End of Faith was inspired by his revulsion against the religion (and religiosity) of the 9/11 attackers,  and it’s also true that the appearance of his bestselling book in 2004 often marks the opening of the American mind (and media and bookstore shelves) to atheism. In fact, by 9/11/01, the new, more aggressive atheism had already been bubbling up to the sunlight from various backwaters of the Internet, particularly on Usenet groups like talk.origins, sci.skeptic and alt.atheism, since before 1995 when I first came into contact with it. Most of those atheists rose in response to Christian evangelicalism and creationism of the 1970s and 1980s, and I think it’s a virtual certainty that Christianity remains by far the most frequent target of most American atheists’ critiques, if only because, like most Americans in general, they still lack more than a rudimentary understanding of Islam.

After reading his article, I criticized Lean on Twitter for his broad brush slander of all new atheists as Islamophobe bigots. He denied the charge. He claimed “I never mention atheists in any general sense. I’m quite specific,” and pointed me to the third paragraph of his Salon piece:

The New Atheists, they are called, offer a departure from the theologically based arguments of the past, which claimed that science wasn’t all that important in disproving the existence of God. Instead, Dawkins and other public intellectuals like Sam Harris and the late Christopher Hitchens suffocate their opponents with scientific hypotheses, statistics and data about the physical universe — their weapons of choice in a battle to settle the scores in a debate that has raged since the days of Aristotle. They’re atheists with attitudes, as polemical as they are passionate, brash as they are brainy, and while they view anyone who does not share their unholier-than-thou worldview with skepticism and scorn, their cogitations on the creation of the universe have piqued the interest of even many believers. With that popularity, they’ve built lucrative empires. Dawkins and Harris are regulars in major publications like the New York Times and the Economist, and their books — “The Selfish Gene” and “The God Delusion” by Dawkins and “The End of Faith” and “Letter to a Christian Nation” by Harris — top bestseller lists and rake in eye-popping royalties.

Maybe I’m being oversensitive, but I don’t see the clear distinction Lean claims he’s making between Harris, Dawkins and Hitchens and atheists at large. It looks like his distinction  is between “New Atheists” and “past” atheists–in other words, like he is, in fact, accusing all Dawkins-Harris-Hitchens–influenced atheists of today (which is virtually all of us) of anti-Muslim bigotry. To me, it looks as though Lean is advancing a bit of a bigotry himself, against New (or new) atheists. If you’re making a charge against someone of thoughtless and unjustified condemnation of a group, shouldn’t you be very careful that your own words don’t render you guilty of the very same charge? END_OF_DOCUMENT_TOKEN_TO_BE_REPLACED 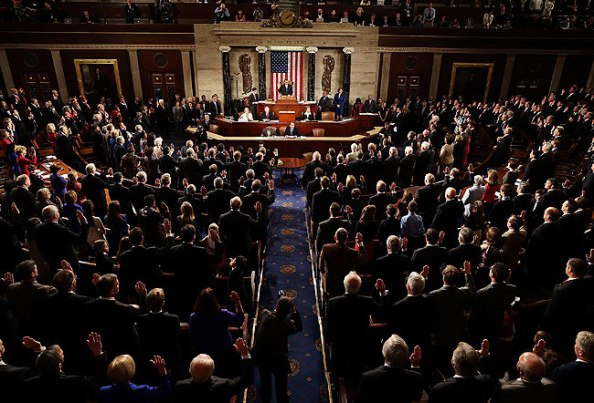 Do you consent to being governed by these people?

On Huffington Post’s Live channel this afternoon, Georgetown law school professor Louis Michael Seidman took up the case he made in the New York Times last weekend that the US should (as the Times piece title had it) “give up on the Constitution.” In the Times piece, Seidman wrote:

AS the nation teeters at the edge of fiscal chaos, observers are reaching the conclusion that the American system of government is broken. But almost no one blames the culprit: our insistence on obedience to the Constitution, with all its archaic, idiosyncratic and downright evil provisions….

Our obsession with the Constitution has saddled us with a dysfunctional political system, kept us from debating the merits of divisive issues and inflamed our public discourse. Instead of arguing about what is to be done, we argue about what James Madison might have wanted done 225 years ago.

As someone who has taught constitutional law for almost 40 years, I am ashamed it took me so long to see how bizarre all this is. Imagine that after careful study a government official — say, the president or one of the party leaders in Congress — reaches a considered judgment that a particular course of action is best for the country. Suddenly, someone bursts into the room with new information: a group of white propertied men who have been dead for two centuries, knew nothing of our present situation, acted illegally under existing law and thought it was fine to own slaves might have disagreed with this course of action. Is it even remotely rational that the official should change his or her mind because of this divination?

Seidman argues  that what he calls “constitutional disobedience” is not radical or new but has been applied over and over in the nation’s history. “No sooner was the Constitution in place than our leaders began ignoring it,” he wrote in the Times. He cites  several big examples, beginning with the writing of the Constitution itself, when national leaders chose expediency over fidelity to the sacred document.

On HuffPo, Seidman the non-radical was met mainly with skepticism from left and right, from defenders of civil liberties as well as from Cato Institute grandee Roger Pilon. The latter said something I actually agree with, that Seidman was getting it “exactly backwards,” suggesting a political solution when our politics is precisely what’s gone wrong. But I think Pilon’s faith in the document is misguided, as I think anyone’s faith in it is. END_OF_DOCUMENT_TOKEN_TO_BE_REPLACED 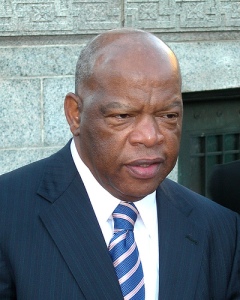 One thing The New Republic, in its dismissal of the #OccupyWallStreet movement, misled its readers about regarding the John Lewis incident at Occupy Atlanta, and one thing anyone who doesn’t watch the video, painful as it may be, will miss: The General Assembly did not “groupthink” Lewis away, which would imply that the decision was, like the Washington crowd’s bullheaded decision to go to war in Iraq, assumed by everyone present to be a reasonable fait accompli. On the contrary, there was a strong pro-Lewis contingent among the Assembly–so strong that after the facilitator ruled that no consensus had been reached, a chant of “Let him speak!” rose up.

You can see for yourself if you watch the video below, which I recommend, especially to anyone prejudiced into a negative opinion about the Atlanta occupation’s impoliteness. You may draw the same conclusion, but it’s important to be accurate about what really happened there: An agenda had been previously agreed to, Lewis was requesting to interrupt it, and, according to the agreed upon Assembly rules, changing the agenda required “consensus,” which the Assembly was unable to reach.Therefore, the previously agreed to agenda remained in effect and Lewis was unable to interrupt. Lewis himself humbly accepted the Assembly’s decision. END_OF_DOCUMENT_TOKEN_TO_BE_REPLACED 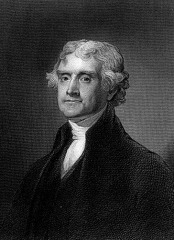 "It must be acknowledged that the term 'republic' is of very vague application in every language..."

Did Jefferson really say that?

On July Fourth, an essay by Nicole Swinford titled 10 Things You Might Not Know About America’s Independence that appeared on the Fox News Web site was regurgitated in full or in part on dozens of right-wing blogs, including one I commented on in a previous post. This essay is almost certain to become one of those annoying endlessly forwarded e-mails decorated with irritating gifs of flying hummingbirds and flapping flags that will be sent around next Independence Day and every one thereafter.

One should always beware of what America’s right-wing amateur historians of the revolution claim Thomas Jefferson said. Many times, when you’re given a Jefferson “quote” from one of these sources, though it’s always intended to back up their faith that the Founders were exactly in line with their own political beliefs, you can almost certainly guarantee that Jefferson meant the opposite of what they claim he meant.

Take for example Swinford’s 6th “Thing,” which reiterates the Republican talking point about what kind of government the Founders intended. (Note that this is word for word what my right-wing friend posted on his blog in that previous post): END_OF_DOCUMENT_TOKEN_TO_BE_REPLACED 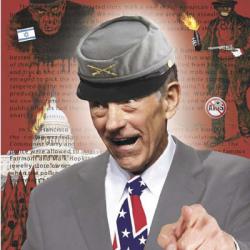 I mentioned in the first of this series that Tea Party and post-Democrat leftist favorite Ron Paul long ago left a trail of basely racist remarks as he crept to his current place of near-prominence in the national and world debate on issues of war, peace and economics. The article that first detailed Paul’s association with fringe-right ideas is by James Kirchik and it that appeared in The New Republic in January 2008 (quoted after the jump): END_OF_DOCUMENT_TOKEN_TO_BE_REPLACED 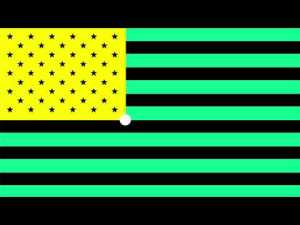 My first encounter with the idea/s of Ron Paul came more than a decade ago on a long-defunct Website, I’m sad to say, the name of which I don’t recall. It was a repository of intelligence about some of the more bizarre beliefs of prominent right-wingers. Jerry Falwell and Pat Robertson were particularly favorite targets. But there was one page devoted to Ron Paul’s outrageous racism, a catalog of some truly ignorant and occasionally horrifyingly mean-spirited remarks Paul was alleged to have made about poor people of color over the course of his political and academic careers.

When, during the last decade, Paul’s courageous (or simply intellectually rigid?) anti-war stance earned him a lot of love from many on the left and heightened his stature internationally, I wanted to double-check my first prejudice against him. Alas, the site was gone, and the web seemed to have been scrubbed of any evidence of Paul’s backwardness on race.  (A Google check today, however, now that Paul is a big favorite of Tea Party types, shows that his racist past–and probable present– is ready to come back and bite him at any time: Jonathan Chait and James Kirchik for example have written on the subject for TNR.) END_OF_DOCUMENT_TOKEN_TO_BE_REPLACED