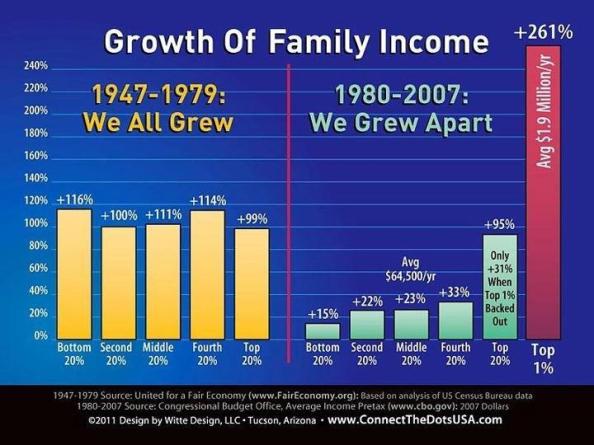 James R. Otteson of the Manhattan Institute begins his article “An Audacious Promise: The Moral Case for Capitalism” with a shameless distortion of a quote from President Obama:

“The market will take care of everything,” they tell us…. But here’s the problem: it doesn’t work. It has never worked. It didn’t work when it was tried in the decade before the Great Depression. It’s not what led to the incredible postwar booms of the ’50s and ’60s. And it didn’t work when we tried it during the last decade. I mean, understand, it’s not as if we haven’t tried this theory.

Clearly, Otteson wants you to think Obama attacked capitalism and the free market, but, of course, Obama did not. Here’s what Otteson elided between “they tell us” and “But here’s the problem”:

If we just cut more regulations and cut more taxes — especially for the wealthy — our economy will grow stronger. Sure, they say, there will be winners and losers. But if the winners do really well, then jobs and prosperity will eventually trickle down to everybody else. And, they argue, even if prosperity doesn’t trickle down, well, that’s the price of liberty. Now, it’s a simple theory. And we have to admit, it’s one that speaks to our rugged individualism and our healthy skepticism of too much government. That’s in America’s DNA. And that theory fits well on a bumper sticker.

In fact, Obama’s words make clear that he was criticizing Reaganite supply-side economics, which, as a professor of philosophy (Chair of the department at Yeshiva University, according to his bio!) should know, is not identical with “capitalism.” As a professor of economics, Otteson should also know that, at the very least, Obama’s case against trickle-down has some strong evidence to back him up. It should occur to anyone arguing in favor of supply-side to pause for a second and compare 30 years of predominating Reaganism with 30 years of Rooseveltian-Keynesian economics to consider which was more successful at resource distribution and scarcity management in the long run. I wouldn’t want to be on the Reaganist side of that debate if I wanted an easy win. END_OF_DOCUMENT_TOKEN_TO_BE_REPLACED

Rep. Joe Walsh of Illinois demonstrates his concept of representative democracy at a townhall held in a bar in his district last weekend. What exercised the Congressman’s patience was the suggestion, apparently popular among the unrattled attendees, that, as I suggested yesterday,  private banks were as much at fault for the depressed or recessed economy as politicians. Walsh displays the Tea Party mindset at its most rigid worst when he asserts that consistency of ideology is more important than accuracy of fact. He doesn’t want the people of his district to forget is that he will not stray from the Tea Party (Republican) line that  private interests are more important than the public interest.

The bottom line: The people get it. Some politicians don’t and don’t want to get it.

PS: Perhaps the most astonishing moment of this video is when Walsh says, “”What has made this mess is your government­, which has demanded for many years that everybody be in a home.” Is a Tea Party Republican actually blaming the American dream of universal home ownership for the economic mess? Is he really suggesting that the American dream is the product of government rather than of individuals? Setting aside the question of whether or not this is right, this seems to be a startling position for a conservative, pro-market, pro-individualist to be taking. I wonder if this will be a new shade of conservatism: anti-American Dream libertarianism.

US Chamber of Commerce's major contribution to jobs creation dialog: A giant banner taunting the White House across Pennsylvania Avenue.

What’s wrong with this rosy picture of entrepreneurship painted by the Manhattan Institute’s Edward L. Glaeser in his article “Unleash the Entrepreneurs” at City Journal?:

Three years have passed since the financial crisis of 2008, and unemployment rates remain painfully high. As of August 2011, America employed 6.6 million fewer workers than it did four years earlier. To try to fix the problem, the Obama administration has pursued a variety of Keynesian measures—above all, the huge stimulus package of 2009, which included not only direct government spending but also such features as tax credits for home buyers and temporary tax cuts for most Americans.

Such policies ignore a simple but vital truth: job growth comes from entrepreneurs—and public spending projects are as likely to crowd out entrepreneurship as to encourage it. By putting a bit more cash in consumers’ pockets, the tax cuts in the stimulus package may have induced a bit more car- and home-buying, but the next Steve Jobs is not being held back by too little domestic consumer spending. Tax credits for home buyers and the infamous program Cash for Clunkers encourage spending on old industries, not the development of the new products that are likelier to bring America jobs and prosperity.

Unemployment represents a crisis of imagination, a failure to figure out how to make potential workers productive in the modern economy. The people who make creative leaps to solve that problem are entrepreneurs. If we want to bring America’s jobs back, our governments—federal, state, and local—need to tear down barriers to entrepreneurship, create a fertile field for start-up businesses, and unleash the risk-taking innovators who have always been at the heart of our economic growth.

Isn’t the default position of American economic policy precisely what Glaeser is selling as the solution to the nation’s economic problems? It looks to me like advocating hitting oneself in the head with a baseball bat to prevent injuries caused by hitting oneself in the head with a hammer.  Glaeser and all “free marketers” are slaves to the notion that entrepreneurship in itself is a panacea for all economic and social ills. What they seem to ignore is that some entrepreneurship can cause economic and social ills. As an example, consider the many franchise-based companies (think food-service) that pay their employees unlivable wages with flimsy benefits packages, forcing many  to supplement their incomes with public services like food stamps or to use emergency rooms as primary doctors offices. END_OF_DOCUMENT_TOKEN_TO_BE_REPLACED

Tyler Durden over at Zero Hedge makes a point overlooked by almost everyone who talks about this debt-ceiling limit compared to previous ones (his emphases):

While everyone and their grandmother is foaming at the mouth how both republicans and democrats hiked the debt ceiling for umpteen times over the past x years, the truth is that never before has the ratio of the proposed debt ceiling to the tax receipt ratio been as high as it is now. At nearly 6 times, this means that the top line (forget bottom line) cash inflows into the Treasury are 6 times lower than the current debt ceiling. And following the upcoming $2.5 trillion this number will surge to almost 8 times.

END_OF_DOCUMENT_TOKEN_TO_BE_REPLACED

The leaders of US business in the form of the US Chamber of Commerce, the New York Times reports, spent millions of dollars last election cycle electing the extreme right-wing dynamos now holding the Chamber and the rest of us hostage for the sacred Republican principle of a balanced federal budget (well, sacred except to Reagan, the Bushes, and the Congressional Republican leaders of the last 30 years). One of these intellectual giants the Chamber was particularly generous toward displays the kind of logic these new leaders (and, by implication, the rest of us) are at the mercy of:

The chamber spent $436,953 helping to elect Steve Pearce, a New Mexico Republican, almost 20 percent of the total that he was able to raise and spend on his own.

“We have talked a lot about Armageddon if we don’t pass the debt ceiling,” he said. “There’s an equal Armageddon on the other side if we don’t start curing the spending problems.”

Set aside that the debt-ceiling “Armageddon” is pending next Tuesday and the other has been pending since Bush and Congressional Republicans spent the Clinton-era surplus on tax breaks for the rich, Pearce evidently wants us to believe  that in order to hold off the second already held-off Armageddon, it’s necessary to bring on the first.

Hey, Chamber, thanks for sending us this leader. Thanks a lot.

Joesph Stiglitz says supply-side economics almost destroyed the world in 2008, and its back again to try to finish the job. END_OF_DOCUMENT_TOKEN_TO_BE_REPLACED

The Wall Street Journal seems to mistake President Obama’s fumbling around with revenue fixes for the irrelevant deficit problem for what he should be doing, which is energetically rekindling a stimulus, with real spending on jobs programs to nourish the nation’s weakening demand-side.   END_OF_DOCUMENT_TOKEN_TO_BE_REPLACED 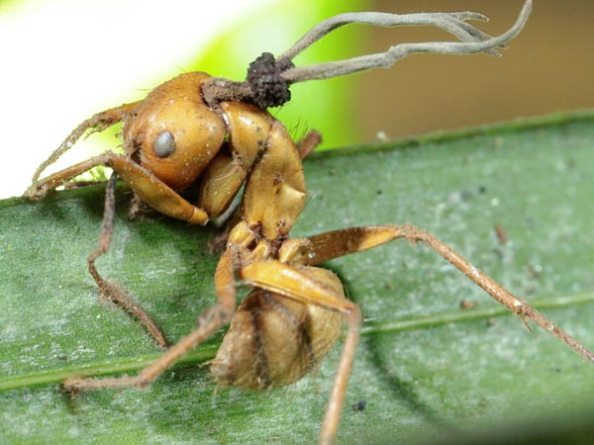 Lancet-fluke infected ant marches to the top of a grass blade where a sheep will ingest it. Much like House Republicans and the supply-side mind virus.

Let’s get down to brass tacks: Republicans are slaves to a fantasy ideology called supply-side. They are not free to consider any actions other than those that enrich the rich. The ostensible logic of this compulsion of theirs is that the wealthy alone are capable of distributing their own wealth, that they do this by investing in ventures that create jobs for the non-wealthy.  But let’s be real:  Republicans are not free to think beyond the first step: Enrich the rich. Any sector other than the rich doesn’t exist for Republicans. Enrich the rich.

In this, Republicans are exactly like the lancet-fluke infected ants Daniel Dennett likes to cite when discussing freedom and religion. Like these helplessly suicidal ants, Republicans are merely the vessel by which a very dangerous meme propagates itself. Until very recently it was not absolutely clear how dangerous this meme was, but the conditions for a perfect storm unleashing the danger have been brewing since the tandem events of the financial crisis of 2008 and the election of Barack Obama. END_OF_DOCUMENT_TOKEN_TO_BE_REPLACED

From Mother Jones, a dozen bits of graphic evidence that supply-side economics is the wrong medicine for what ails the US economy, if shared prosperity is the health standard for national prosperity. Just one pair makes that point perfectly:

Three articles in today’s New York Times have only reinforced my determination to get the word #Demandside into the national conversation. I have little faith in anything, let alone American politics or the national discourse, but I do have utter faith in the notion that if our political so-called leaders do not return to pre-Reagan-era demand-side economics, we can kiss the prospect for shared prosperity good-bye. END_OF_DOCUMENT_TOKEN_TO_BE_REPLACED