At a sold-out New Hampshire Republican Party dinner Monday night, Sen. Rand Paul (R-Ky.) encouraged the room of GOP supporters to embrace diversity and outreach if they want to take the White House in 2016, the Courier-Journal in Louisville reports.

Paul urged New Hampshire Republicans to reshape their party’s image and become the “party of opportunity.”

Paul may be playing coy about his plans for a presidential run, but there’s no doubt at all about his plans to influence the Republican Party’s national chances for the highest office in some way. In addition to his high-profile and principled filibuster of drone attacks on Americans in March (principles that he seemed to have walked back a bit in April), Paul has also caught the press’s attention visiting Howard University,  the storied “Black Harvard” located in Washington, D.C.,  and the Hispanic Chamber of Commerce, where he spoke in favor of amnesty for undocumented workers in some cases  in opposition to his own position pre-Election 2012. Paul has been putting quite a bit more sweat into outreach to non-Republican demographics than any of his peers since, maybe, Jack Kemp in the 1980s.

So why is it almost certain that Paul will fail? It’s not just that he’s dealing with the Sisyphean task of making the Grand Old White People’s Party attractive to young multiculturals. I mean, that’s a difficult enough task, for sure, especially given the way the party’s hardcore rank-and-filers and its most visible politicians are able to undo all Paul’s efforts with just a little bit of  talk about the issues that matter most to Paul’s alleged target audiences (if his audience isn’t actually just more moderate white independents), and the way many on the right resist threats of outreach as betrayal of fundamental principles. No, I think Paul is going to fail unless he finds another way of talking about his aspirations for the party–and to really try to understand if his aspirations for the party are genuinely appealing to non-Republican groups. It’s one thing to want more diversity in the party; it’s another thing entirely to know how to build it. You do not build diversity by making speeches that scream how little you understand the audience you’re trying to appeal to. END_OF_DOCUMENT_TOKEN_TO_BE_REPLACED

I’ve just had a testy little exchange of tweets with Jake Tapper, White House Correspondent for ABC news. Tapper tweeted  this question this afternoon: “Did Professor Derrick Bell Visit the White House? http://abcn.ws/vZLFsU” To which I replied: “So what if he did?”

The occasion of these tweets was the late Andrew Breitbart’s last gasp attempt to smear Obama as a black separatist radical with a tiny snippet of video from a protest at Harvard Law School in 1990 for more diversity on the faculty. Taken from a WGBH news story that was quoted in a  Frontline episode that ran in 2008, Breitbart’s clip shows Obama introducing and then embracing the late Derrick Bell, Harvard’s first tenured African American law professor and one of the intellects behind “critical race theory.” (More about that in a bit.) END_OF_DOCUMENT_TOKEN_TO_BE_REPLACED

Michael McAuliffe at Huffington Post reports on some sizable donations in Ron Paul’s campaign war chest from the sorts of racist fringe dwellers the notorious Ron Paul newsletters of the early 1990s were designed to appeal to:

Paul’s 2012 campaign has received more than $6,000 from people who have identified themselves as white separatists or supremacists, or who are listed on anti-hate group sites such as the Southern Poverty Law Center.

Two prominent donors are leaders in what may be the most ambitious white nationalist political movement in the U.S., American Third Position. One is William Johnson, the group’s chairman. Another is Virginia Abernethy, a former Vanderbilt professor who is listed as a director of the party.

Most presidential campaigns reject what they regard as money from tainted sources. Paul has not done that, even though Abernethy and Johnson are well known for their views and Paul has encountered Johnson before.

It doesn’t look as though Paul will be gaining any more traction as a Republican. He’s got his solid fan base in the party, which doesn’t seem able to grow or shrink or bear any sign of sensitivity to the currents of the primary race. So, unless the anti-Romney contingent decides to throw over Santorum and Gingrich finally, this news is likely to have zero impact either way. And the way things are in the GOP, it would likely be more of a reason to move toward Paul than away from him, if only because Republican rank-and-filers love to side with anyone under attack from the “liberal media” for being too outrageously right-wing.

We have a hint as to how Paul intends to handle this, according to McAuliffe. END_OF_DOCUMENT_TOKEN_TO_BE_REPLACED 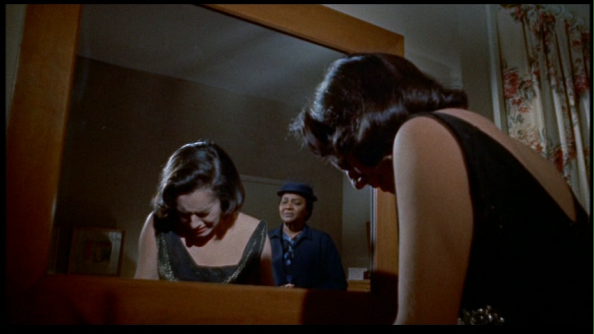 A few weeks ago, after reading an obituary of underground film legend George Kuchar in the New York Times, I watched Jennifer M. Kroot‘s 2009 documentary It Came from Kuchar, a very enjoyable film in its own right, about the delightfully weird hand-made movies of George and his twin brother Michael. The Kuchars of the Bronx made over-the-top satires with their friends and family on, first, a wind-up action DeJur 8mm camera (the kind I loved making films with as a kid) and then a Bolex 16mm (the kind I always wished I had). Unlike their underground peers Andy Warhol or Kenneth Anger, the Kuchar’s were primarily interested in Hollywood-style narrative (though their movies are far stranger than anything Hollywood could ever dream up) and were heavily influenced in particular by Douglas Sirk, whose melodramas they watched over and over at local movie houses.

From my days of interest in New German cinema, I knew Rainer Werner Fassbinder was also a Sirk fanatic, and I was intrigued by the homages he paid Sirk in films like Lola and Veronika Voss–not the narrative influence so much as the visual influence, the use of  primary color light gels and art design components to telegraph emotion. These visuals also clearly appealed to the Kuchars. In It Came from Kuchar, you can see that George was still practicing Sirk-style lighting in his film classes at San Francisco Art Institute. (Sins of the Fleshapoids, which is available in multipart on YouTube, is a good example of an original Kuchar epic employing Sirk-inspired lighting techniques.)

I only knew about Sirk as an auteur worth investigating from my interest in Fassbinder. So far as I know, I had never seen a Sirk until just the other night. It was the Kuchar films that piqued my interest anew, so when I saw Imitation of Life available on Netflix, I queued it up. By coincidence, my own twin brother Erik recommended I see the remake of Philip Yordan’s Anna Lucasta (directed by Arthur Laven) with Eartha Kitt and Sammy Davis Jr just that day, so when Imitation of Life was over, I went right into Anna Lucasta, which is also available for instant streaming on Netflix. They make for an interesting double feature. END_OF_DOCUMENT_TOKEN_TO_BE_REPLACED

Sanchez and Weigel, in the piece linked to above, plausibly trace the history and possible provenance of the most vilely racist items in Ron Paul’s popular newsletters from the late 1980s and early 1990s to libertarian intellectual Lew Rockwell, a former Paul political aide and campaign staffer. Rockwell, like Paul, shares many views in common with anti-imperialists on the left, not least of which is plain, unfettered anti-imperialism. But whereas the left views capitalism as a major source of and impetus for imperialism, Rockwell and company are undistilled free marketeers. The Rockwell quote above quite eloquently elaborates, I think, on Paul’s second principle, which I discussed in a previous post, particularly on the phrase “voluntary association.” END_OF_DOCUMENT_TOKEN_TO_BE_REPLACED

I mentioned in the first of this series that Tea Party and post-Democrat leftist favorite Ron Paul long ago left a trail of basely racist remarks as he crept to his current place of near-prominence in the national and world debate on issues of war, peace and economics. The article that first detailed Paul’s association with fringe-right ideas is by James Kirchik and it that appeared in The New Republic in January 2008 (quoted after the jump): END_OF_DOCUMENT_TOKEN_TO_BE_REPLACED