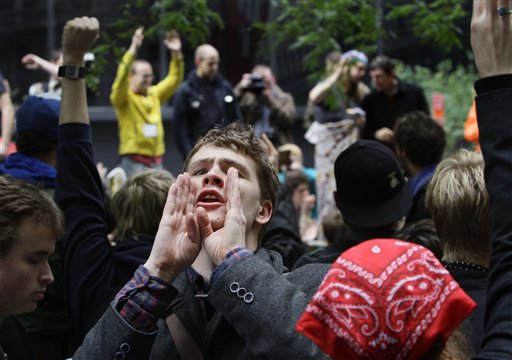 Bernard Harcourt has an essay in the New York Times‘ The Stone blog in which he proposes a syntagm, as the continental philosophers would call it, standing for the unique mode of resistance energizing #occupationWallStreet and its sister occupations around the world:

Occupy Wall Street is best understood, I would suggest, as a new form of what could be called “political disobedience,” as opposed to civil disobedience, that fundamentally rejects the political and ideological landscape that we inherited from the Cold War.

Civil disobedience accepted the legitimacy of political institutions, but resisted the moral authority of resulting laws. Political disobedience, by contrast, resists the very way in which we are governed: it resists the structure of partisan politics, the demand for policy reforms, the call for party identification, and the very ideologies that dominated the post-War period.

Occupy Wall Street, which identifies itself as a “leaderless resistance movement with people of many … political persuasions,” is politically disobedient precisely in refusing to articulate policy demands or to embrace old ideologies. Those who incessantly want to impose demands on the movement may show good will and generosity, but fail to understand that the resistance movement is precisely about disobeying that kind of political maneuver. Similarly, those who want to push an ideology onto these new forms of political disobedience, like Slavoj Zizek or Raymond Lotta, are missing the point of the resistance. END_OF_DOCUMENT_TOKEN_TO_BE_REPLACED