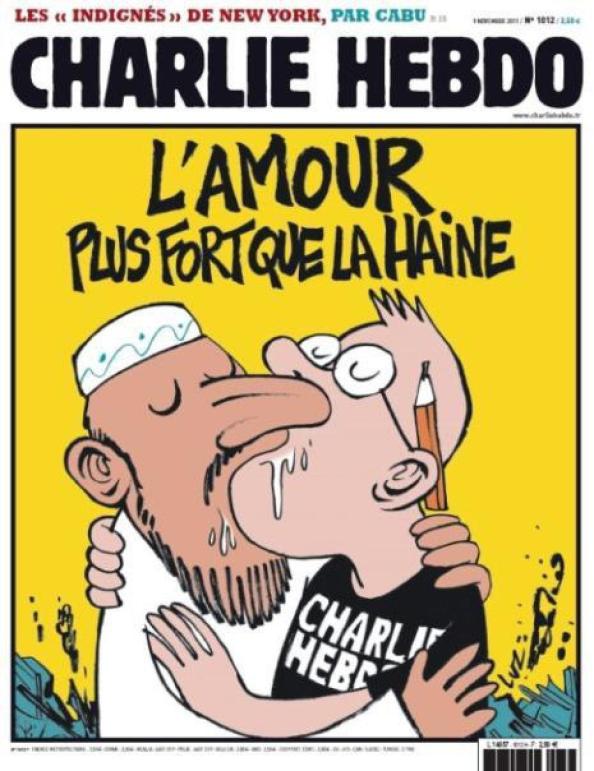 My basic feeling about Charlie Hebdo: The crime was committed by a clique of criminals who self-identify as Muslims and identify this crime as being part of a holy war. But the crime is not holy, it’s murder of people for offending with cartoons, which is about as pathetic an excuse to commit murder as can be imagined. So the murderers deserve to be caught and shown only the mercy inherent in the criminal justice system in France and no more. That should be the scope of the discussions around this crime.

Instead, we are being treated to the spectacle–the same-idiotic-old-shit of a spectacle–of incensed white people, mostly, wanting to spread the blame for this murder away from the murderers and all over Islam and believers in Islam. To me, the idiocy of Islam is another discussion, and this red herring of Islam’s “blame” for this murder is just an excuse for incensed white people to behave badly and give full vent to their worst, most bigoted impulses. It’s all beside the point. It accomplishes nothing but spleen venting. It’s tiresome to have to fight it, but I just can’t stand stupidity from any quarter.

I just wonder, what am *I* missing? I have a knee-jerk need to fight the prevailing idiocy. What makes me so smart that I’m immune to it all, though? What am I missing? I don’t know…

I don’t listen to talking heads. I just want the basic facts, not all the bullshit that always comes with them, all the gas spewing out of idiots’ gas holes on TV about them. Of course I found this story irresistible, like everyone else in the world. I was also curious how Twitter was talking about it, so I saw that #killallMuslims had been trending worldwide. Then I saw what the general feel for the story was on Twitter, and it was basically ultramorons over here wanting to #killallMuslims, Muslims and bleeding hearts over here claiming the killers weren’t “true” Muslims because “Islam is a religion of peace” (with a bunch of both types criticizing CH for “provoking” the attacks), and atheists over here jumping on the Bill Maher/Christopher Hitchens (praise be to his name) bandwagon using this as an excuse to piss all over their favorite most-hated sky pixie worshippers of the moment. All so predictable and beside the point.

It’s not that I have any great love for Islam. It’s that I have low tolerance for snap judgments about the meaning of news events. I mean, what is the justice issue here for me? It’s not that innocent Muslims are being smeared by careless Westerners. It’s that careless Westerners are smearing the discourse with irrelevancies. Maybe I’m wrong. Maybe the Dawkinses and Mahers and Harrises, by pointing  their fingers at Islam are contributing to a global intellectual environment in which ultimately fewer adults will choose Islam as an ideology, which would be a good thing. On the other hand, maybe they’re contributing to a global intellectual environment in which borderline Muslims get knee-jerked back to Islam because Islam’s enemies say it’s bad so it must be good.