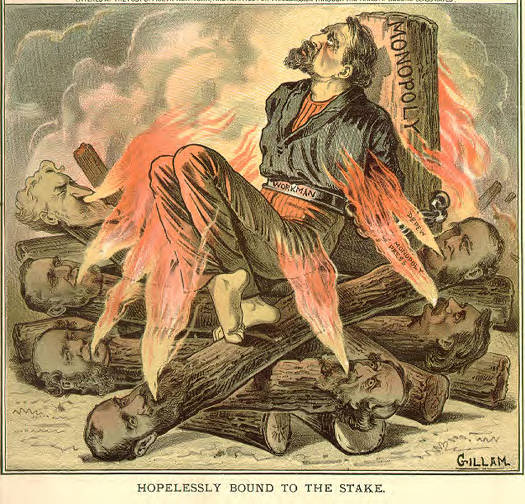 Continuing the discussion I began here and continued here, in this installment, I present for your consideration more of the debate I participated in nearly a decade ago over the inherent contradiction in the term “anarcho”-capitalism.

I should say a little more about why this debate remains relevant. If you listen to the rhetoric of some of the “intellectuals” in the Republican party, you will hear echoes of “anarcho”-capitalism’s sacred principles: private property is a natural right; the state is an impediment to freedom; taxation is theft; freedom to associate with persons of one’s choosing is a natural right. Ron Paul‘s Ten Principles of a Free Society almost reads like a Ten Commandments for anarchos. It’s not surprising given that Paul is a Libertarian and “anarcho”-capitalism is also a product of Libertarian philosophizing, is, in fact, Libertarianism taken over the side of the slippery slope. Paul and his son Rand are far from the only Libertarianism-espousing politicians in power. One other very powerful Libertarian  in the Republican party is Wisconsin Congressman Paul Ryan, whose budget aims to dump social welfare programs from the government’s repertoire of services for the citizenry. These ideas are as close as they’ve ever been to  America’s power center. Are we all comfortable with that? END_OF_DOCUMENT_TOKEN_TO_BE_REPLACED