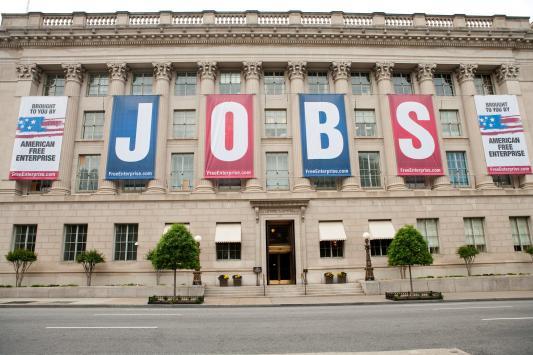 US Chamber of Commerce's major contribution to jobs creation dialog: A giant banner taunting the White House across Pennsylvania Avenue.

What’s wrong with this rosy picture of entrepreneurship painted by the Manhattan Institute’s Edward L. Glaeser in his article “Unleash the Entrepreneurs” at City Journal?:

Three years have passed since the financial crisis of 2008, and unemployment rates remain painfully high. As of August 2011, America employed 6.6 million fewer workers than it did four years earlier. To try to fix the problem, the Obama administration has pursued a variety of Keynesian measures—above all, the huge stimulus package of 2009, which included not only direct government spending but also such features as tax credits for home buyers and temporary tax cuts for most Americans.

Such policies ignore a simple but vital truth: job growth comes from entrepreneurs—and public spending projects are as likely to crowd out entrepreneurship as to encourage it. By putting a bit more cash in consumers’ pockets, the tax cuts in the stimulus package may have induced a bit more car- and home-buying, but the next Steve Jobs is not being held back by too little domestic consumer spending. Tax credits for home buyers and the infamous program Cash for Clunkers encourage spending on old industries, not the development of the new products that are likelier to bring America jobs and prosperity.

Unemployment represents a crisis of imagination, a failure to figure out how to make potential workers productive in the modern economy. The people who make creative leaps to solve that problem are entrepreneurs. If we want to bring America’s jobs back, our governments—federal, state, and local—need to tear down barriers to entrepreneurship, create a fertile field for start-up businesses, and unleash the risk-taking innovators who have always been at the heart of our economic growth.

Isn’t the default position of American economic policy precisely what Glaeser is selling as the solution to the nation’s economic problems? It looks to me like advocating hitting oneself in the head with a baseball bat to prevent injuries caused by hitting oneself in the head with a hammer.  Glaeser and all “free marketers” are slaves to the notion that entrepreneurship in itself is a panacea for all economic and social ills. What they seem to ignore is that some entrepreneurship can cause economic and social ills. As an example, consider the many franchise-based companies (think food-service) that pay their employees unlivable wages with flimsy benefits packages, forcing many  to supplement their incomes with public services like food stamps or to use emergency rooms as primary doctors offices.

Glaeser cites Starbucks as an example of sterling job-creating entrepreneurship, which it apparently is in some respects. Starbucks does pay most of its workers  in the same $7 to $10 range as McDonald’s and Wal-Mart.  But it also pioneered domestic partnership and part-time benefits, and just last year, Starbucks founder and CEO Howard Schultz resisted pressure from shareholders to ditch its generous health care package to save $300 million annually saying, ““we can’t take our company where it needs by doing it on the back of our people.”

But as Kim Fellner, writing at the AFL-CIO’s Media Center pointed out, Starbucks is “A Mixed Blend for Workers.” Schultz, for all his progressive noise, is as adamantly anti-union as the Walton family. (Here’s another take on the lengths Schultz has gone to wipe out unionization among his workers.) As Fellner says:

No matter how benevolent the policy of a Starbucks, its corporate management is not going to explicitly argue on behalf of worker concerns. Some of what’s good for General Motors or Starbucks might also benefit employees. But as the current crisis in the auto industry makes all too clear, some of what makes life sustainable for workers, be it living wages, health benefits or safety regulations, can easily be sacrificed to the corporate bottom line unless there is a countervailing demand. [In December 2008], Starbucks announced it could no longer guarantee the employer match for its 401(k) retirement plan. Even with a union, the task of protecting workers’ rights and benefits is formidable. But without a union, it’s virtually impossible.

But, of course, “free” marketers like Glaeser are not interested in the quality of life that jobs provide the people who work them, just in the quantity they claim “free” markets can provide if entrepreneurs are “unleashed” to create them.

What is really wanted, however, is an entirely new form of community-based entrepreneurship rooted in what people actually need, not on what they might be persuaded to buy. There is work to be done in our communities, work toward sustaining them economically, ecologically, socially, spiritually. We need to find ways to get that work done and reward people for using their unique skills to do it. Just following the tired old path Milton Friedman urged us onto 30 years ago, the pursuit of which anyone with intelligence can see has resulted in the disastrous state we’re in now, will not work in the future, either.

PS: Starbucks, according to NPR, is hoping to kickstart job creation with a $5 million contribution to Community Development Financial Institutions, which provide low-cost loans to small businesses and entrepreneurs  in “underserved” communities. It’s a nice token gesture. A lot more is needed to turn this economy around.