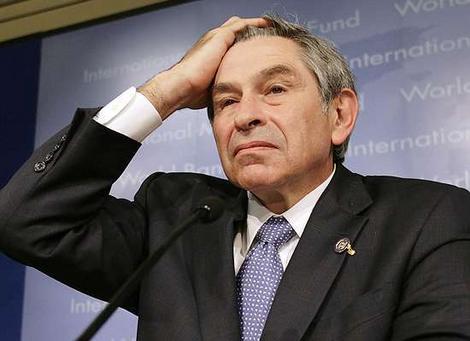 One more (at least) in my continuing series of Iraq war “anniversary cards,” if you will. This one is from an open letter by Andrew J. Bacevich to Bush doctrine architect Paul Wolfowitz.

So even conceding a hat tip to Albert Wohlstetter, the Bush Doctrine was largely your handiwork. The urgency of invading Iraq stemmed from the need to validate that doctrine before the window of opportunity closed. What made it necessary to act immediately was not Saddam’s purported WMD program. It was not his nearly nonexistent links to Al Qaeda. It was certainly not the way he abused his own people. No, what drove events was the imperative of claiming for the United States prerogatives allowed no other nation.

I do not doubt the sincerity of your conviction (shared by President Bush) that our country could be counted on to exercise those prerogatives in ways beneficial to all humankind — promoting peace, democracy, and human rights. But the proximate aim was to unshackle American power. Saddam Hussein’s demise would serve as an object lesson for all: Here’s what we can do. Here’s what we will do.

Although you weren’t going to advertise the point, this unshackling would also contribute to the security of Israel. To Wohlstetter’s five precepts you had added a silent codicil. According to the unwritten sixth precept, Israeli interests and U.S. interests must align. You understood that making Israelis feel safer makes Israel less obstreperous, and that removing the sources of Israeli insecurity makes the harmonizing of U.S. and Israeli policies easier. Israel’s most effective friends are those who work quietly to keep the divergent tendencies in U.S.-Israeli relations from getting out of hand. You have always been such a friend. Preventive war to overthrow an evil dictator was going to elevate the United States to the status of Big Kahuna while also making Israelis feel just a little bit safer. This audacious trifecta describes your conception. And you almost pulled it off.

Imagine — you must have done so many times — if that notorious mission accomplished banner had accurately portrayed the situation on the ground in Iraq in May 2003. Imagine if U.S. forces had achieved a clean, decisive victory. Imagine that the famous (if staged) photo of Saddam’s statue in Baghdad’s Al Firdos Square being pulled down had actually presaged a rapid transition to a pro-American liberal democracy, just as your friend Ahmed Chalabi had promised. Imagine if none of the ensuing horrors and disappointments had occurred: the insurgency; Fallujah and Abu Ghraib; thousands of American lives lost and damaged; at least 125,000 Iraqis killed, and some 3 million others exiled or displaced; more than a trillion dollars squandered….

[P]reventive war was supposed to solve problems. Eliminating threats before they could materialize was going to enhance our standing, positioning us to call the shots. Instead, the result was a train wreck of epic proportions. Granted, as you yourself have said, “the world is better off” with Saddam Hussein having met his maker. But taken as a whole, the cost-benefit ratio is cause for weeping. As for global hegemony, we can kiss it goodbye.

One of the questions emerging from the Iraq debacle must be this one: Why did liberation at gunpoint yield results that differed so radically from what the war’s advocates had expected? Or, to sharpen the point, How did preventive war undertaken by ostensibly the strongest military in history produce a cataclysm?

Not one of your colleagues from the Bush Administration possesses the necessary combination of honesty, courage, and wit to answer these questions. If you don’t believe me, please sample the tediously self-exculpatory memoirs penned by (or on behalf of) Bush himself, Cheney, Rumsfeld, Rice, Tenet, Bremer, Feith, and a small squad of eminently forgettable generals.

3 thoughts on “Dear Mr. Wolfowitz: Iraq Didn’t Go Quite As You Planned”